What Sled Dogs Can Teach Us About Working in Teams 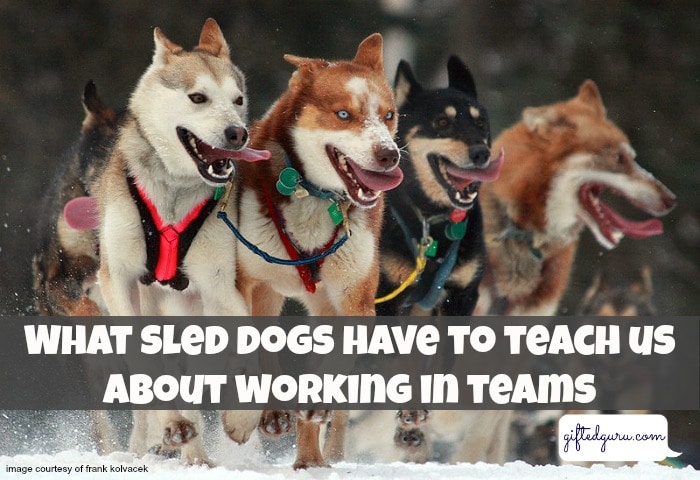 Let’s be honest: working in groups is not typically a strength for gifted learners.

That doesn’t mean that we just shrug our shoulders and say, “Oh, well I (or my child) just prefer to work alone.” That’s simply not practical in today’s cooperative learning and work environments. So how can we help kids work well in groups?

The answer is in a surprising place: the Iditarod.

Let’s use this great image from James Brooks. 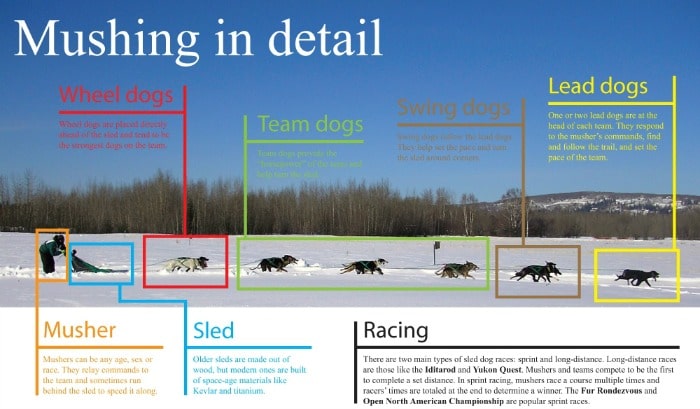 Notice how James explains how each dog has a role, a vital role, in the team, and how the dogs need different characteristics to succeed in each of these roles.

The Lead Dog is the one in front. James explains that they steer the team, setting the pace for the those behind. The lead dog has to be a smart dog, with initiative and common sense. Even when there is blinding snow, the lead dog must be able to keep to the trail or the whole team will be lost. You don’t get chosen to be the lead because you like being in front; you get chosen to be the lead because you have the mix of qualities it takes to do an effective job in the position.

In a team of people, the team leader likewise steers the team and sets the pace. The leader needs initiative, and must also be able to get others to follow. Sometimes lead dogs are in pairs, and if a team of people has two leaders, this requires complete alignment between them. They need to be willing to choose what’s best for the team, even when personality conflicts are blinding.

Swing dogs (sometimes called point dogs) are right behind the leader. They swing the sled when the trail curves or turns.

On a work or class team, swing people are those who support the leader in a way that gets others on the team to follow along. If the team has strong leaders and strong team members, but the team members won’t follow the leader, the team will be lost. Swing people on a team act as bridges between the leader and the rest of the team.

Between the wheelers and the swing dogs are the powerhouse of the team. They are the team dogs – the dogs that put the strength in the team.

Without people willing to work, a team will go nowhere. A leader can have good ideas, but if there is no work power behind the leader, the team will falter and ultimately fail. Although being part of the team without a special role may feel frustrating (especially if you feel like you have better ideas than the leader), this spot is crucial and is the meat and heart of any team.

Cambridge University did a study on this. They created 120 simulated management teams to make decisions for a fake business. Some of the teams were composed of entirely high IQ people, and others were mixed. The high-IQ teams did worse. Why? They spent too much of their time in competitive debate and academic showmanship. Additionally, they all wanted to do the same thing – the analysis, the counteranalysis – the thinking. No one wanted to do the nitty-gritty planning, practical stuff. No one wanted to be a team dog.

In a team of people working together, this position is the one that helps keep the team focused on the goal, even when the pressure is on. It is vital that each team have someone whose even temper (at least during the team time) infuses the team with strength and steadiness. The wheel dog is in back, and if you take a picture of the team from the front may be hidden, but the role is vital, no matter how much it is behind-the-scenes.

Now, people aren’t dogs, and this metaphor will fall apart if you take it too far, but I do believe it is an incredibly beneficial way to help kids find their place on a team. Just as dogs may fill different roles depending upon the size of the team and other factors, students will flow in and out of different roles on a team. Explain the different roles on the team and avoid celebrating when the child is chosen to be the leader of a team. Rather, help the child identify the importance of the role he/she is playing.

When students are working on teams, it’s important to do some reflection. Ask:

After the group dissolves, do some post-race reflection as well. Ask:

Model this as well. When you’re working on a team, let your children and students hear you share about the position you play and how you bring your own unique strengths to the team in the role you are in. Make sure to avoid sending overt or subtle messages that the lead is the only acceptable or valuable position.

With support and skill development, gifted kids can be spectacular team members. Just because you’re smart doesn’t mean you are a good leader or should be the leader in every group.

Learning to embrace and enjoy our position on the team will not only lead to better team outcomes, but it will also make us feel a greater sense of satisfaction in our work. With a little effort, a little reflection, and a little practice, our kids won’t look at group work as punishment and a fate worse than death. They won’t always need to be the leader to feel valued and satisfied.