The Advantages of Acceleration 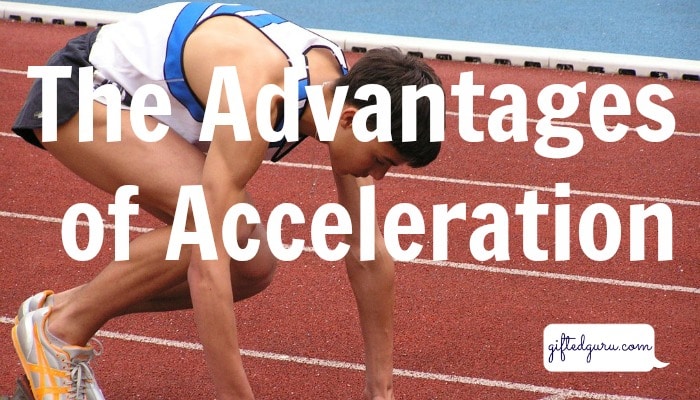 This boy at the starting blocks is ready to race. He’s really fast. He is, in fact, the fastest runner on the team. To make sure that no one’s feelings get hurt and that he is able to fit in socially, his coach has him wait every 100 meters for everyone else to catch up, and then he’s allowed to go another 100 meters. Everyone on the team finishes the race together with identical times. The team never wins any races, and no one knows how fast this kid can really go (because they don’t let him run his fastest race), but everyone likes him at the team parties. And that’s the important thing, right?

This scenario may sound ridiculous, but it is far less ridiculous than the entrenched practice of putting students in grade-level bands with no thought to any other criteria than chronological age. The only thing that  approaches it in absolute stupidity is the refusal to acknowledge that there is a cheap, easy, and effective solution. Disclaimer: I accelerated all of my children with universally positive results, so I don’t even pretend to be neutral about this.

Reading an post called Against Acceleration (which I hesitate to even link to, actually) has brought this to the surface for me, and I want to discuss the how’s and why’s of doing acceleration right (and why we should). So all of those opposed to acceleration: I’m calling you out. 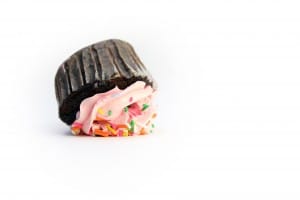 First, we have to look back at why school is set up the way it is: it is designed to create good employees. To this end, students are compartmentalized by chronological age (down to the day, in most instances). Many schools’ hackles get raised when the suggestion is made that the child may benefit from learning at a level above that of the  other kids who were born during the same twelve-month band.

What is truly ridiculous is that the date of school admission varies from state to state, so that a four-year old in California with an October birthday can start Kindergarten, while a child in Texas born the same minute has to languish in preschool. Where is the reason in this?

Until the entire system is fixed, acceleration corrects this error. Your birthday shouldn’t be a limitation. It’s just a starting point.

Next, people who are opposed to acceleration nearly always point out the socialization aspects. They worry that somehow the accelerated child will commit some social faux pas at the third-grade equivalent of a cocktail party. This is the argument that makes the very least sense to me. While acceleration isn’t necessarily going to fix students’ social challenges, it doesn’t make a child fit in any better if they are forced to remain in a classroom in which they are head and shoulders above their age-group peers cognitively. Newsflash: other kids notice. I know: I taught third grade.

If a child is struggling socially, address that. Don’t punish a child academically because of social challenges. We would object strenuously if a teacher attempted to lower a child’s grade because he or she didn’t have friends in the class, yet forcing the child to stay in the “right” grade does just that. Kids can find age-group-peer friends outside of school as well, if that is a concern. Scouting, sports, arts, and other activities all ensure that kids can form friendships.

Oh, and have you ever noticed that almost everyone has social challenges of some kind in school? I enter into evidence: 7th grade. I rest my case. Those girls in the picture don’t like her any better because she stayed in a grade that’s too easy for her. 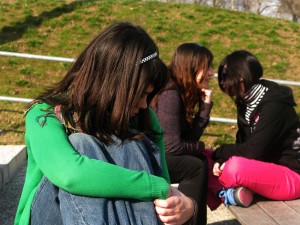 Keeping a child in an inappropriate academic placement will not necessarily result in friends. Do I really have to say that?

Another issue the keeps people from embracing acceleration is that they have the mistaken notion that it is nothing more than “skipping” a grade. There are multiple forms of acceleration, and they can be used in combination. AP classes are a form of acceleration, but everyone likes those. Why do they not have the same bias against them as other forms? Essentially, the student is “skipping” the high school version of the class and going straight to the college level.

Acceleration can mean going to a different grade for a single class. It can mean doing two years’ worth of subject in a single year (Let a child move at his or her own pace? Blasphemy!). It can mean AP classes. It can mean moving ahead a grade.

One of my sons whole grade accelerated first grade (in full disclosure, he attended first grade for two painful weeks) and then single subject accelerated math and science. He graduated from high school at 17 with 74 hours of AP credit (and a prom date, for those who are worried about his social development). I asked him recently if he wishes he’d stayed at the “right” grade level, he said he couldn’t imagine having to stay in school another minute more than he did. Another son single subject accelerated in math and took loads of AP courses. The other son ate a high school combo meal of AP and dual credit courses. All of this is acceleration. 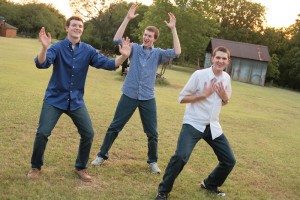 The boys in this picture were accelerated and lived to tell the tale (and dance the Haka – blame their Aussie dad and too much watching of Aussie Rugby League).

I’m not saying that every child should accelerate. The Iowa Acceleration Scale can help schools and parents evaluate whether acceleration is right for the child.

It is not the duty of gifted children to make people comfortable. It is their job to learn. It is the adults’ job to make sure that they have an appropriate education placement so that can occur. Acceleration can do that cheaply, easily, and with a minimum of stress on everyone when it is done appropriately. But you don’t have to take my word for it.

The Institute for Research and Policy on Acceleration invites students to share their own stories about acceleration, and you can read them here.

Why School Retention is a Terrible Idea