How a Test is Helping a School District Be More Inclusive 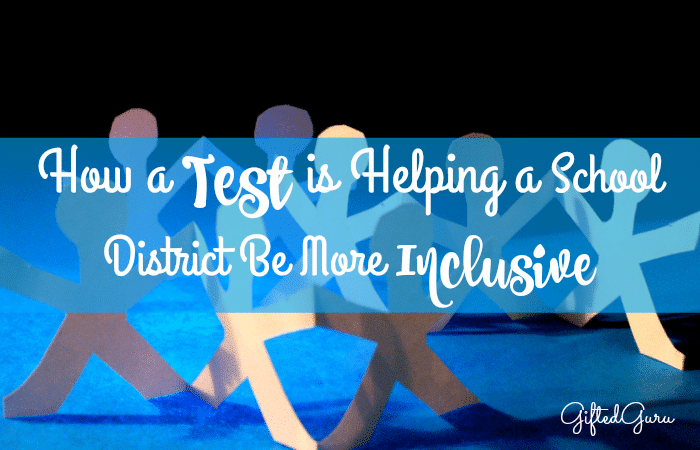 When Debbie Roby joined the Lewisville ISD as its Supervisor of Gifted Education, she realized that they needed to make a change.

The students in the district who were being identified as gifted and talented were not coming from the full range of the population. The children who were culturally and/or linguistically different were not being identified.

The Naglieri (commonly known as the NNAT) is a short test (30 minutes) that can be administered in a group setting requiring nothing more than the test itself).

This particular test was useful to Debbie because of one quality: it didn’t require English skills to take it. Her district has students who speak nearly 80 languages, so tests that require reading in English created a barrier.

Lewisville used the NNAT as part of a entire systemic shift towards inclusion.

It Starts with Kindergarten

They began looking at Kindergarten students using a series of planned experiences (somewhat like the Kingore Observation Inventory developed by Bertie Kingore) including the NNAT.

Before the new plan, they were relying on parent referrals to determine who to test. Now, says Roby, “We have some data to go along with instinct.”

After the district obtained the data, it compared the students to others of like age, environment and circumstance. The idea is to create a district composed of talent scouts, not gatekeepers.

An added benefit of the NNAT has been making more time for service, not just testing.

The Results are In

So what’s the result been?

They’re getting better referrals, so they’re qualifying more kids. Their GT demographics are more reflective of the district population.

Once kids are identified as being good candidates for GT services, the child’s individual needs and strengths are used to create an educational experience for that child, a model made possible by the presence of a GT specialist on every elementary campus.

The NNAT has functioned as a part of a model of individualized programming (why isn’t that an oxymoron?) in Lewisville.

Now, while I’m pretty vocal about my feelings regarding giving IQ tests to young children, I’m a fan of this model for a few reasons:

Is a single test going to change a district. Nope. Is the NNAT the best abilities test around? I have no opinion on that (which will surprise those of you who know I have an opinion on lots of stuff).

Let’s Brag on Lewisville for a Moment

Is Lewisville doing great stuff? Yep. They’re using the NNAT as part of an inclusive service model designed to fit their unique needs.

That’s particularly impressive because Lewisville, while having a large culturally and linguistically diverse population, could easily fill its GT program without these measures. It’s awesome that they’re not satisfied with that.

What about those who say that that’s not really “gifted” if you norm reference the results with narrow norms, rather than criterion reference or use national norms?

I say this: in school, giftedness is a service model, not an ID. It’s the name we give to describe kids who can benefit from a specific program of service or set of opportunities. In some districts, those kids will not have scores as high as children in wealthier (and let’s just call it – whiter) school districts. But that doesn’t mean that those kids can’t benefit from the program and opportunities.

Someday, we’ll figure out how to make GT more equitable (read more about why I think it’s so racist now here), but until then, let’s get more districts doing what Lewisville is doing: worrying less about numbers and more about how to do better with the kids they have. All the kids.

Don’t get me wrong: sometimes you need the numbers, and sometimes you have so many high ability kids that you need to split hairs about who is in and who is not because if you don’t draw a line somewhere, you would never have enough resources (read: money) to serve them all.

But if that’s not the case, if you can be, like Lewisville is, open to a childcentric model, then go for it.