The Perils of Perfectionism 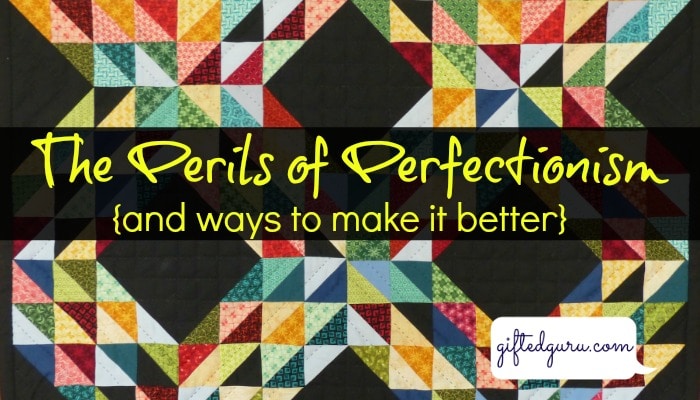 When I was learning to quilt, the only consistent about my stitching were the mistakes. A friend reassured me that the famous and fabulous Amish quilters always placed a deliberate mistake in their quilts in recognition that only God is perfect.

After that, whenever I made a mistake (often), I would shrug and say, “Oh, that’s just my Amish mistake” (or my 23rd Amish mistake, whatever), and go on. I have since discovered that the idea of an Amish mistake in a quilt isn’t really accurate, yet I still share it because it dovetails beautifully with an aspect of underachievement that has profound and far-reaching impact: perfectionism.

Ring the bells that still can ring
Forget your perfect offering.
There is a crack in everything,
That’s how the light gets in.

All too often gifted youth find it impossible to forget their perfect offering, instead sacrificing themselves, their time, and their talent on the altar of perfection seeking.

The fourth dynamic, Controlling Image Management, plays a key in underachievement because it manifests itself in apparent apathy and lack of concern for things parents and teachers want and need them to care about. It’s the obvious one. In reality, perfectionism and underachievement meld in virtually all of these scenarios.

But this is not a lament, not an ode to the woes of perfectionism. What I want to focus on is what we can do – strategies to help gifted learners break out of these patterns, or at least learn to function within them in a way that works for them.

Even though I know that my blog audience is adult, please allow me to share these thoughts as if it were the kids and teens themselves reading, because it is truly to my younger self I speak.

As you set out for Ithaka
hope the voyage is a long one,
full of adventure, full of discovery….

Keep Ithaka always in your mind.
Arriving there is what you are destined for.
But do not hurry the journey at all.
Better if it lasts for years,
so you are old by the time you reach the island,
wealthy with all you have gained on the way,
not expecting Ithaka to make you rich.

Ithaka gave you the marvelous journey.
Without her you would not have set out.
She has nothing left to give you now.

And if you find her poor, Ithaka won’t have fooled you.
Wise as you will have become, so full of experience,
you will have understood by then what these Ithakas mean.

So guess what? It’s the journey after all. Don’t get hung up on the Sirens or taken in by the witches like Circe. Don’t get anxious and hung up on trying to get to your destination and worried that you’re supposed to be there but instead you’re frustrated with this one homework problem or essay. Here’s the key: it’s not finishing that’s important. It’s what you learn on the way.

If you try too hard to be perfect (I know, I know. You’re not trying. It’s just how you are. I get it.) you can’t let the light in because it comes through the cracks. So close the book, put the pencil down, turn out the light, and make peace with the idea that you have done all you needed to do. Excellent is good enough. Don’t be your own worst enemy. Just do it. Be a Weeble and a Bozo. Fail forward and set out for Ithaka. Hope the voyage is a long one.

Perfectionism: the occupational hazard of giftedness from Lisa Van Gemert