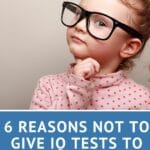 6 Reasons Not to Give IQ Tests to Young Children

The reasons not to give IQ tests to young children are compelling. As the Youth & Education Ambassador for Mensa, I received inquiries every day (sometimes with accompanying videos) from parents (and grandparents) wanting to know how to get a young child tested.

Mensa allows youth fourteen and over to take the Mensa Admissions Test, and it accepts testing done outside of Mensa by schools or psychologists, but it does not test young children.

Although you might think Mensa would have a vested interest in having people test young children so they could join the organization, it actually takes no opinion. I, however, do.

Here are six reasons not to give IQ tests to young children:

1. The scores are unstable.

If you test a child who is three years old and the score is high (say two standard deviations above the mean or more), the odds that that score will be the same if the child were tested six years later are very, very low. It’s the equivalent of the IQ lottery. Possible, but don’t make it part of your retirement plan.

The problem with that is that parents then carry that unstable score number in their heads and it compromises their ability to make appropriate choices later.

It is very hard to tease apart giftedness and precociousness in young children, and if you are an early reader with a strong vocabulary and good memory, you can end up with a much higher score than you would if you were tested when you were older.

The scores are more likely to be stable if all of the subtest scores are aligned, so it is possible to get a fairly accurate score at this age, but unlikely. So unlikely, in fact, that the odds that it will detrimental instead of useful are too high to make it a good idea in most cases.

2. The testing is rarely done for the good of the child.

We’ve all heard stories of two-year-olds joining Mensa and wondered what in the world was going on. Quite often, the parent was having the child evaluated for something else and the IQ testing was done as part of a larger evaluation. For instance, I had one of my children evaluated for speech therapy, and he got a Woodcock-Johnson as part of that evaluation.

When a parent wants a child tested purely for an IQ, the parent needs to carefully examine his or her own motives. Testing should not be done on a whim, for pure curiosity, or to prove a point.

Testing should only ever be done to serve the child, and that is rarely necessary at very young ages.

It is occasionally, but that is unusual. If you have a child who is not meeting developmental milestones or there is some other cause for concern or evaluation, that’s when it may be called for. Your pediatrician can and should be the one to help you decide if this is the case, not teachers or grandparents or others who say, “Wow, he can count to ten in Spanish? You should get him tested!”

3. It misses the sweet spot.

Just like tennis racquets, IQ testing has a sweet spot. In my opinion based on training from psycologists in the field, that sweet spot is somewhere between seven and twelve years old (others may disagree, and I’m not married to this range, I am just seriously dating it).

Can you test adults? Of course. Can you test young children. Obviously. But if you are really looking to know intellectual ability and potential, I’d love to see your sweet spot scores.

4. It’s harder to get a great administrator.

IQ tests are pictures, not CT scans. They tell you what that person looked like on that day, with that test, with that test administrator, under those specific conditions. What they don’t tell you is a much longer list.

Now, we can’t control every factor, but the younger the person being tested is, the more important it is to get the child evaluated by someone really good. By that I mean someone who not only works with the gifted but also with young children.

The problem is that very few people with these reputations like to test very young children simply to get an IQ score for a curious parent. Parents then sometimes turn to less reputable businesses with fiscal incentive to give a high score.

Parents seeking testing for very young children are vulnerable to testing predators out to make a buck, not share good information. Testing of young children should only ever be done by licensed psychologists with experience in working with and assessing gifted children.

So many school districts do universal screening for gifted programs with abilities tests or will conduct an assessment if requested that spending hundreds or even thousands of dollars on an IQ test for a young child is money that would much better spent shoved in a 529 plan and set aside for the child’s college.

Even if you decide to test yourself later, it’s money I believe is better spent at an older age. This is especially true in light of the fact that your odds of great, stable scores are slim.

You really want to know if your four-year-old is gifted for free? Show her a Monty Python movie and if she laughs, she’s gifted. No, really, gifted kids get that crazy humor (and the adult innuendo, unfortunately).

I’m kidding of course, but I could literally give a you a list of ten thousand things a three-year-old needs more than an IQ test, and I have had people ask me how to test the IQs of frozen embryos. I only wish that were hyperbole.

Do you have a Kindergarten student who is fluently reading and doing double-digit addition in a school that doesn’t evaluate that early? That may be a reason to seek testing, but only if there are options as a result of the testing. If the district won’t accelerate the student (you can read about acceleration here) or provide services, then the money for testing is probably better spent elsewhere. Test only if you are willing and able to do something with that information.

I was an English teacher for a very long period of time. In the revision process of writing, I would teach my students to give each paragraph the “So What?” Test. This test asks, “So what? What does this say that is vital information that furthers the purpose of the essay?”

Testing very young children rarely passes this test. So what? So what if the IQ is super high? How does that further your purpose in parenting? “Gifted” is an adjective modifying the noun “child,” and it is that noun that guides the verbs of parenting.

Young gifted children are, at essence, children, and they need the same things all young children need: time spent with parents, books read to them, unstructured play time, a modest array of quality toys (like cardboard boxes), love and time outdoors.

They do not need flashcards, so-called “educational toys,” parents who teach them cognitive cocktail party tricks to display for friends, or formal education. You don’t need a score to give them that.

The Pythagoreans believed six to be the first perfect number, yet this list is far from perfect. There will be many, perhaps, who will disagree with me on this, and I’m open to that. This is simply my opinion.

I’d far rather have parents relax a little and enjoy their children without worrying that if they don’t get the child tested and on some kind of bogus mind development program at a young age, then the child will not achieve his or her potential.

My first question would be, potential for what? For happiness? For kindness? For love? These are the important things of life.

My friend has a son with fairly severe brain damage. Christopher will never achieve cognitive milestones or cure cancer, but he shares loves unending, and no test is needed for that.

Love your young children, read to them, crawl on the floor with them, and play a few games of Candyland® instead of testing them. Trust me. Testing can wait.