8 Reasons You Should Label Kids as Gifted

You should label kids as gifted if the label fits.

This is a shockingly controversial statement, and I think it is because of three reasons:

I don’t find these reasons compelling, and I will share eight reasons why (in no particular order).

Why I Think You Should Label Kids as Gifted

Reason 1: It allows them to receive academic support and services.

In most cases, it is school systems labeling kids as gifted, and they do so to be able to serve kids with different needs from typical learners.

In schools, “gifted” is a service model, not an identity. You can be “gifted” in one district and not another because of the criteria for receiving that service varies.

This ambiguity disturbs some people, who want to see their child as either gifted or not, yet this isn’t how it works in schools.

If we don’t allow the student to be identified for the services the school offers for them, we deny the child appropriate educational placement. To me, it is no different than denying a child with dyslexia (who may also be gifted, of course) the “label” dyslexia. You’re cutting off your nose to spite your face.

Refusal of the label denies services.

Everyone is labeled. The only choice is whether we want more formal labels as opposed to only the informal labels applied to us every single day.

“Labeled” is a loaded term that at its heart means, “recognized as.”

You can labeled as tall, short, fat, thin, belonging to a certain ethnic or racial group, having a particular facial structure or feature, or a wide variety of other physical attributes. You can also be labeled as a reader, an artist, an athlete, a parent, a sibling, a grandchild, a Christian, and on and on.

Labels are unavoidable, and I’m not sure why we’re so against them. Perhaps it’s because we think it will narrow the way the person sees him- or herself or the way others will see him/her.

I have read many opinion pieces that advocate not labeling people, yet I think that is silly. You can’t help but label people. It’s in our DNA. You can’t not notice someone behaving rudely. You can’t not notice that someone is 7’4″ tall. The “label” is simply the reticular activating system sending you a message: tall person at three o’clock. Labels are how we make sense of our world.

Obviously, you don’t want the child seen as only any one label, but rather as a whole person. That doesn’t apply to just the label of “gifted,” however, and we will not prevent a child’s being labeled as anything because we don’t allow them to be labeled as this one thing.

Some people argue against the term “gifted,” believing it implies superiority or arrogance.

I believe the opposite. To me, the word “gifted” as it applies to cognition is a constant reminder that this was a gift, not earned.

No matter which way you look at it, however, the child did not choose that term, and it seems patently unfair to say that children are responsible for the distaste of a word they didn’t have any voice in choosing.

Additionally, it doesn’t really matter what word you use – because of anti-intellectualism bias, any word used to indicate cognitive ability would take on these same connotations.

Reason 4: Giftedness is no guarantee. It’s potential; not promise.

I read this horrible article about why elementary school children shouldn’t be labeled as gifted (I’m not linking to it because it was so wrong, so offensively wrong and ignorant), and the author wrote that when her son was identified as gifted, she was sure it meant he “was surely destined for great things.”

You misunderstood, and in your misunderstanding, you harmed your child. I know you didn’t mean to, but you did.

Giftedness means that you have ability. Like a seed, it is a potential, but it must be nourished, cared for, fertilized, and have sun in order to grow.

It is the responsibility of parents and educators of gifted kids to explain that being identified as gifted is not a “get out of working hard free” card.

We must teach them the mundanity of excellence.

We must teach that “smart” does not equal “never study” or “it will always come easy.”

The label is not to blame: we are.

Reason 5: Gifted kids have social and emotional needs as well as cognitive needs.

Even a quick perusal through NAGC’s list of common traits of gifted kids will reveal that only a fraction of them are cognitive.

These kids feel differently, as well as think differently. If they don’t get labeled as gifted, they may not get the understanding they need.

Of course, being identified as gifted is certainly no guarantee that they will get the understanding they need because the same ignorance that says gifted kids don’t need different educational resources leads to believing they don’t have different social/emotional needs as well.

To me, this is the number one biggest misconception about gifted kids. People as a whole seem to think that gifted just means “smart” – like you think better than other people.

The danger of this thinking leads to things like Ian Byrd wrote so eloquently of on his website.

It also leads to the idea that they will make really good tutors to other kids because they are like Dr. Pepper with extra caffeine.

Gifted kids think qualitatively different from the norm. They tend to be divergent thinkers, finding the showing of work to be nearly impossible, the explaining of reasoning overly burdensome, and the working within a group virtually unbearable.

All of these dynamics can (and should) be addressed, yet at their heart lies this truth: when you are gifted, it’s not just that your brain is efficient. Your brain is divergent.

They need challenge in school in a way that is very, very different from just more work.

Reason 7: Gifted kids deserve all of the information about themselves.

My mother was adopted, but never told until she found out herself as an adult. This withholding of information from her was excessively and unnecessarily painful. Children deserve the truth about themselves.

When you get a name for the apartness so many gifted children feel, you can make more sense of those feelings.

Reason 8: It allows parents to get support, too.

Parenting gifted children is not for the faint of heart. This game is not for amateurs. Don’t try this at home, folks.

When a child is labeled as gifted, at least you have something to Google. Maybe you’ll get lucky and you’ll find NAGC or your state gifted organization or a parenting Facebook group or some other resource that will help you navigate Giftedland.

Parents of gifted children can feel isolated and even attacked. It is not uncommon to find defensive parents of GT kids – that’s a natural response to being marginalized for long periods of time.

When we label a child as gifted, we actually identify an entire family as needing support, encouragement, understanding, and resources. When we refuse to identify kids as gifted, we deny not only the child, but also the parents of the services and support they might otherwise receive.

When I was in elementary school, I was identified as gifted using a Stanford-Binet LM. The day of that test was the best day of school I’d ever had. The experience alone was powerful.

I remember the dawning realization in the evaluator’s eyes that I was thinking differently from others. For the very, very first time, I felt that my brain was an asset.

I was put in a special class with others who thought like me. It was the school equivalent of coming home.

I was also a candy-striper, volunteering hundreds of hours at a local hospital. I also played soccer. I also babysat and earned money for the things I wanted. I was not just gifted, but it was a part of who I was.

I had to study for the grades I earned. I worked hard. I know how hard you have to work to do well, even if you are gifted. The grade in AP English did not fall from the sky. My successes did not spring fully formed like the goddess Athena.

I’ve struggled with many of the social and emotional traits of gifted people (Unfortunately, they forgot to “ungift” me when I graduated from high school, so I’m still struggling). I’ve lost friends because of undesirable traits I didn’t work hard enough to adjust.

I’ve left jobs because I still struggle to work in groups with people who don’t care about their work or won’t pull their weight (there’s a special place in you-know-where).

Adding the idea that I shouldn’t have even had the small consolation of knowing where all of this comes from is insult to injury, and that’s what the anti-labelers are saying. They’re saying that kids don’t deserve to know who they are.

And that’s why you should label kids as gifted.

Gifted is different, not better.

Labeling is identification and information, not destiny.

The name implies unmerited, not arrogance.

The knowledge of it is power, not an easy path. 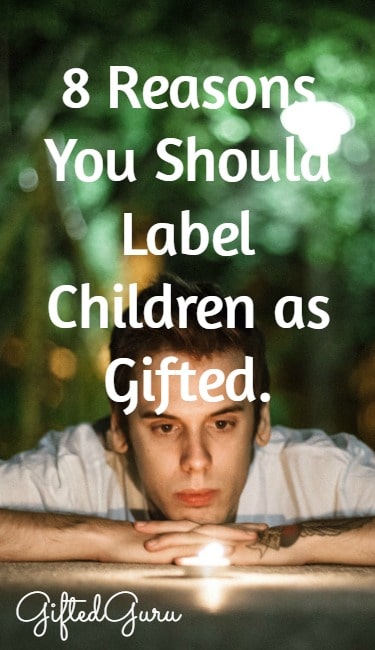