Why I think Joel Stein Should Join Mensa 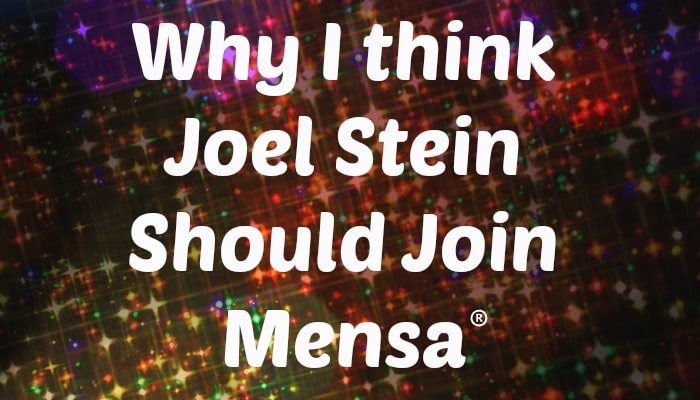 I think Joel Stein should join Mensa, and here’s why. 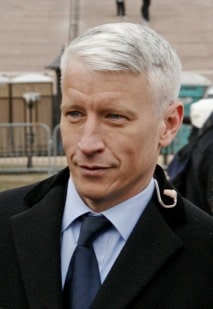 First, let’s just take a moment to admire and respect the wonder that is Anderson Cooper. He is smart. He is very good-looking. He has class. He has style. He has better shoes than anyone I know. He is most women’s journalist crush. Yes, in my world, women have journalist crushes.

Here is what prevents his being my journalist crush (and notice how I used the possessive in front of that gerund – just for you, Anderson, just for you): he’s in a committed relationship with a man. This, ladies, has a detrimental effect on your odds.

But don’t let that stop you. That is one seriously deep gene pool. You are basically evolutionarily programmed to have your journalist crush on him. It’s not your fault.

My journalist crush is not on fab Anderson. No, my journalist crush is on Joel Stein. Why, you ask? Because he is snarkalicious. Now, just like Anderson, Joel wouldn’t be interested in me because a) we are both happily married to other people, b) he doesn’t even know I exist, and c) he is nominally Jewish and I am rabidly Mormon.

So while I have no hope of a relationship (or conversion), I do have this wish: Joel Stein, please join Mensa.

Full disclosure: I am Mensa’s Gifted Youth Specialist, and am not the least bit impartial. Of course, I may not be working there anymore after my boss reads this, so take the disclosure with a grain of salt.

Joel should join Mensa because he will raise its coolness factor by a factor of 3.1415… Joel is the only person who consistently makes me laugh out loud while I’m eating breakfast (Kashi G0-lean Crunch with almond milk). He can make you laugh so hard that stuff comes out your nose. Bad stuff.

They put his column in the back of Time magazine as a reward. Read all the other stuff, and then you can have Joel for figurative dessert. (Right before the quiz at the end, which Time does right by making celebrities answer instead of readers.)

Joel should join Mensa because it would give him column fodder for the entire remainder of the century. In Mensa, we’re a little microcosm of the world, and he will find so much to write about that he will need his own magazine and a new book. This would be good for his bank account and my reading pleasure.

Joel should join Mensa because he could single-handedly end the anti-intellectual bias in our society, and not only because he may perpetuate it (just a little, admit it Joel). People would read that he joined Mensa, and they’d say, “Wow! If Joel Stein joined Mensa, smart people must not all be particle physicists with pocket protectors.” Time would stop making every cover that features a gifted kid look like it came out of some Kafkaesque dystopic novel.

Joel should join Mensa because our magazine could be even more awesome if he wrote for it every now and then. I don’t think Time would see it as a conflict of interest at all because I don’t think they read our magazine (I enter into evidence little dystopic gifted kid covers).

Joel should join Mensa because Lisa Simpson is an honorary member, and I can’t think of anything more fantastic than having a group to which both of them belong.

Joel should join Mensa because people will stop thinking that Mensa is some elitist group full of people who sit around congratulating themselves on being smart. This is true of other organizations, but in Mensa, we don’t have to do that because we literally carry the smart card around in our wallets, so why keep trying to prove it? Joel would never be like that (would you, Joel?), so everyone would know we’re not like that, either.

Joel should join Mensa because we have this get together every year, so we’d be a huge captive audience just waiting with baited breath to hear him speak. Who can resist that? I know Joel can’t.

Joel should join Mensa for the same reason so many of us should: it’s just fun. Can I be personal for a minute, Joel? I think you need just a tad more fun in your life. You have some issues. Really, you have a whole subscription, but since you’re my journalist crush, I’m not going to linger on that.

Like, for instance, you may notice there’s no picture of you in this post, Joel. That’s because when I went to your website to see if you had publicity stills, you had a page of lovely photo manliness, but you also threaten to sue people who used the photos. Who does that, Joel? Anderson wouldn’t do that, Joel. Just sayin’.

Let me help you out: join Mensa.

So, really, here’s an invite for you, Joel. You and your wife and kids are welcome to come to Mensa’s Annual Gathering this year in Boston as my guest (we have great programs for kids – I know because I run them). Just try it.

I think you’ll agree: you belong. I think it’s time you joined.