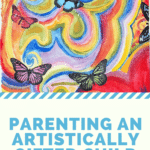 Parenting an Artistically Gifted Child: Interview with an Artist

So many of us struggle with issues in parenting gifted children. How do we make sure we don’t break them? How do we support their gifts without being pushy or putting undo pressure on them? How do we nuture without suffocating? How do we navigate our own insecurities?

I was interviewing Ava, a young gifted artist, as part of my Interview with a Gifted Kid series. Her dad, a professional artist and art teacher, was home at the time. I took the opportunity to ask him a few questions about parenting a child with strength in the same area in which one also has a strength.

He gives such beautiful answers that apply to all parents. It’s perhaps one of the greatest discussions of excellent parenting I’ve participated in.

We also dive into Dan’s life as an artist. He’s so humble that it’s hard to align his attitude with the magnitude of his developed talent.

I’ve included a few pictures I took of art he’s created hanging in his home. Much of his art is in the garage, a kind of beautiful micro-museum. It’s somewhat surreal to step into the garage filled with a drum set, exercise equipment, and a guinea pig, and see this hanging there. Like that’s normal.

Some of my favorite pieces are works he does from old photographs of strangers he finds in flea markets and garage sales. On two of the images below, you can see the inspiration photo attached to the painting. They are breathtaking.

If you haven’t read the interview with Dan’s daughter, Ava, you can find that here.

The Interview with a Gifted Kid Series

As part of my mission to make the world safe for the gifted, I interview gifted kids (and grown-up gifted kids) and share their stories of life in Giftedland.

My hope is that it will create a body of voices that will be persuasive that gifted students have needs, that giftedness isn’t some “get out of hardship in school free” card, and that it will give hope to gifted individuals that they are not alone.

If you’d like to read all of the stories, you can find them here.

Let’s jump into my interview with Dan.

The Artist as Parent

We began the interview with my asking Dan when he first realized Ava had an artistic gift.

But early on it was pretty clear she was bent that way, so I’ve always tried to be available but not pushy.

I wanted it to be her thing.

It’s fun, we’ve gone sketching together a few times, and painting, and it’s so fun to do that, but it’s always felt that when we’ve done that, it’s something that we’ve just both wanted to do. I hope I’ve never put any pressure on her to make her feel like she has to do that because of me, or be successful because of me.

Lisa: As a language arts teacher, there were times when my kids were in school where I would hear or observe myself, things that their language arts teachers were doing or saying in class that I thought might be detrimental to their development of the love of the thing. I’m wondering if that’s ever been an issue for you.

Dan: With other teachers? (laughs) We were talking about it today, actually. Her current art teacher was making some suggestions to her artwork, and I was proud of Ava because she said she was going to stick to her guns and do what she wanted, and I told her, “Yes! I’m behind you one hundred percent because it’s your piece and your expression.”

That’s the tricky thing because we have teachers who have experience and degrees, but Ava and I talked this afternoon about the difference between opinion or taste, and principles of art. There is no weakness in your art at all, it’s just a matter of taste, something she would have done if it were her piece, but this is yours, your expression.

Lisa: Do you remember the first thing you saw that she had drawn that you thought “oh.” I don’t know if you’ve ever seen the movie Searching for Bobby Fischer, it’s about a chess prodigy. It’s based on a true story, and there’s a scene in the movie where the mom is watching this little kid play chess with guys in the park, and her head just tilts, and there’s this moment in the tilt that you realize she’s seen — “Oh, okay, this isn’t normal,” and she knows her kid has something special. Do you remember seeing anything where you thought “oh, well, that’s not normal for an eight year old!” or something like that.

Dan: I don’t really have an ah-ha moment, but I would say as early as five or six, she was spending a lot of time drawing and was really good at it, and that’s when I thought, maybe this might be her thing.

Lisa: So would you go to a back-to-school night or something and see all the kids’ pictures up on the wall and realize right away “oh that one looks different.”

Dan: Since I’ve taught high school, my knowledge was from that. In college we studied art development from the beginning, so what little training I had about artistic development is what I used as a reference. A vague awareness of what most four-year-olds would draw. The level of sophistication they would have. That, and the amount of time she was doing it too told me that this is something she really enjoys.

Lisa: And finding pleasure in that time. Seeing that it wasn’t a task, it was for pleasure.

Lisa: So, she said she would like to try gouache, or oils, is there something that you’ve done that you would like to see her take a stab at some time?

Dan: I can’t think of anything. I think I’ve seen her do everything. Maybe the only thing, I probably haven’t done more things, like say with drawing on plexiglass or things like that, but I would like to see what she would do with that.

Lisa: You do big murals too, big installations. Have you ever seen her do anything big?

Lisa: Well I think you need to find a wall in the house! (laughter) My favorite mural that I’ve seen that you have done is the cherry blossom tree. That’s my favorite. What’s your favorite?

Dan: There are a few that come to mind for different reasons, there’s one I did at the Woods Chapel. They built this new building for their preschool and I did a mural there I was really proud of. I did this wall for a friend of mine who is a music teacher, and that was a simple monochromatic thing, but I was really proud of it – a big music staff, with notes, and I was inspired by an artist named Aaron Douglas. He works in a monochrome style.

Lisa: What gives you that sense of satisfaction in your work? What makes a piece satisfying?

Your technique, your medium, what you want to say, and the other qualities that can’t be named, those unnameable things, but you know they’re there, and when they all seem to piece together that’s really satisfying.

Lisa: Do you feel that in any other area of your life besides your art? Is there anything else that gives you that feeling?

Lisa: You are also a musician.

Dan: I think the worst thing that could happen, is if there is anything that would take away the joy from it. If it becomes a negative thing.

I don’t know if that’s happened to me, but I’ve heard other people with music or art, there tends to be ups and downs in your life where you feel like you’re really creating good stuff and then you’re not.

But that’s not always a bad thing because in the down times, among other things, it helps you appreciate when you are creating well. It’s hard to explain, but like when the stock market is down you’re supposed to buy stock, then it goes back up. In church, they talk about during Lent, they call it a dark time, because you think about Jesus dying, they call it the dark woods, and they say there are gifts in the dark woods.

The dark times are not wasted entirely, you wouldn’t be the same if you just had a high level all the time, you benefit from the lower periods.

Lisa: I want to ask you an art question that I asked Ava. Do you have a color that is your swiss-army knife?

Lisa: Does it annoy you when someone calls something teal but it’s actually aqua?

Dan: (laughs) No, that doesn’t bother me.

NOTE: Dan let me choose a painting from the garage installation, and I chose this gorgeous still life of oranges. It shows some of his expertise with blues and blue/green.

In keeping with its origins, I brought it home and immediately hung it in my laundry room.

Lisa: Your artwork that you did for the cover of “Living Gifted” is still such a treasure to me, and hundreds of kids have benefited from that book. I love that they get to see your art.

Dan: That makes me very happy to think about that, thank you for having me do that.

[The image below is a scan of the original artwork that became the cover of the book.]