Why Gifted Kids Test Quickly and Why That is Okay 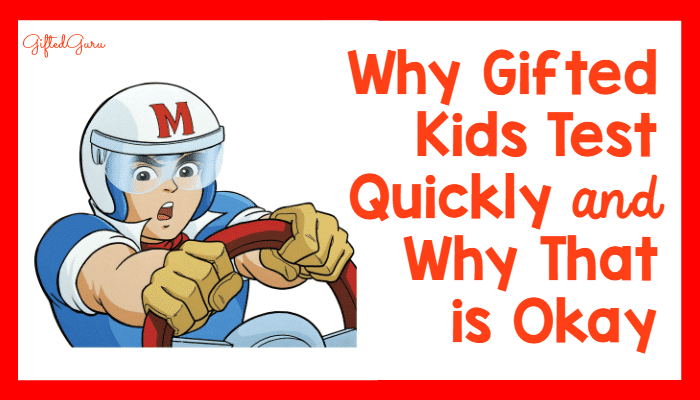 Gifted kids often finish first, even on high stakes tests, and that gets on people’s nerves, especially concerned teachers.

I’m going to explore some of the reasons why gifted kids test quickly and why that is okay. (This applies to gifted adults as well, actually.)

Test taking is complex, isn’t it? We say that some people test well and some don’t, but it’s a little more tricky than a single skill. Think about all that’s involved:

The list goes on and on. Being a “good” test taker is more than one skill.

Being quick at taking tests is neutral – in isolation, it is neither good nor bad.

So, why DO gifted kids test quickly?

I’m approaching it as an educator and a parent, not a neuroscientist, so I’m giving the layman’s view of these ideas.

In addition to the prompts themselves, there are often passages to read and analyze on tests. If you read quickly, you’ll finish more quickly.

Why this is okay: Forcing quick readers to read more slowly will not necessarily improve comprehension. In fact, what it will often increase is irritation, which is counterproductive.

2. Quick thinking is often a part of what it means to be gifted.

Now before some people freak out, saying they have gifted kids with slow processing speed, recognize that I say “often.” A lot of smart people think quickly. In fact, it’s part of what we mean when we say someone is “smart” because we test for it on IQ tests. For example, on the WISC-IV, a common IQ test, the Cognitive Proficiency Index is composed of the scores from the Working Memory and Processing Speed subtests.

If I have to read a question and reason the answer, that will happen more quickly if I have quick reasoning skills.

Why this is okay: As with quick reading, forcing a quick thinker to think longer about something will not necessarily lead to better thinking. It will often simply result in irritation.

3. They know what they know and what they don’t know.

When GT kids see questions, not only do they know quickly whether or not they know the answer, they also know when they don’t.

The neural pathways start lighting up, and the message is quickly sent back, either, “Boo-yah, got it!” or “Nothing to see here, folks.”

Why this is okay: The kids know that no matter how long they sit there thinking about it, the information is either there or it is not. If they’ve studied effectively (I wrote about how to do that here and how not to do that here), continuing to stare at the question in this instance will only increase anxiety and frustration.

4. They quickly figure out the strategy.

All tests have a native strategy. Some penalize you for wrong answers (ahem, SAT). Others don’t. Some tests have reading material off of which they base clusters of questions. Some tests are looking for Utopian-type application situations (In the ideal setting…). Some tests get progressively more difficult. Some tests blend question types (multiple choice, short answer, etc.), while others are all one type.

The more you play, the better (and quicker) you get at that piece. Forcing good strategists to justify every move not only slows play, but it will not result in better performance. In fact, it will likely result in frustration and a lack of desire to play at all.

I recently took a big teacher certification test. I even wrote about how I prepared for it. The test was 120 multiple choice questions. They give you five hours. Five hours. The last time I did the same thing for five hours in a row, I was in labor with my youngest child. Please.

Often, gifted individuals bore quickly, and part of why they move at a rapid pace through tests is so they can match their mental energy for that task to the length of the test.

Keep in mind that the students may not have answered any more questions correctly if they’d been forced to slow down because they may not have had the mental energy left for those questions. There’s a sweet spot there.

This list isn’t comprehensive, yet it does give some insight into why gifted kids often speed test and why forcing them to slow down may be counterproductive.

The Part Where I Do the Big Reveal

So what happened with my test that I completed in 20% of the allotted time? Well, I scored nearly perfectly on it (I missed five questions), and I don’t think I would have gotten any higher of a score had I spent four more hours in the testing room.

Here’s a screen shot of the first page of my score report so you can know I’m telling the truth. 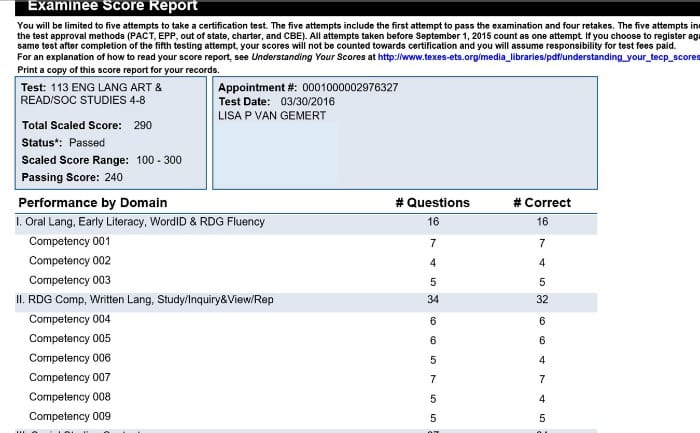 So, how about you? Any Speed Racer test takers out there? 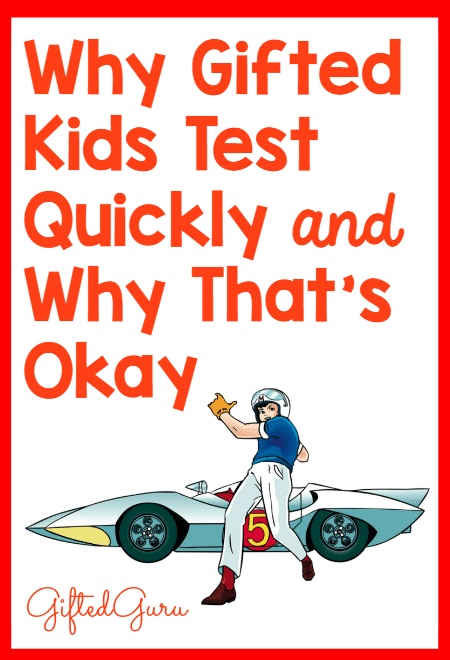