7 Things Not to do While Studying 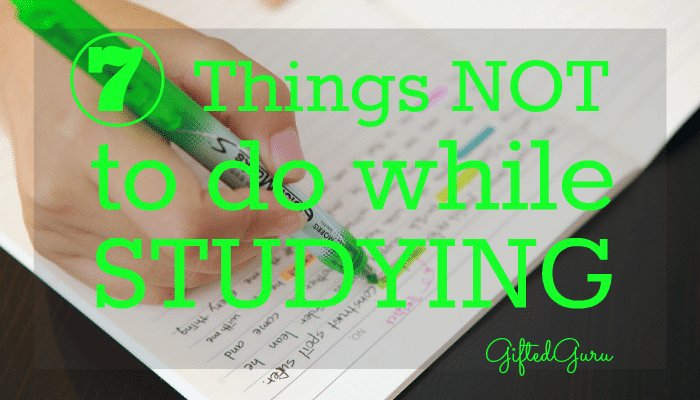 I’m sharing seven things not to do while studying as a companion to my post on 6 Strategies for Effective Studying.

The truth is that some things don’t work, even though they’re popular. Here are some tips for what NOT to do. Just a spoiler: you’re not going to like this list. Don’t shoot the messenger.

Underlining or highlighting text is pretty, and it makes it look like you’re studying, but the research just doesn’t back it up as a study strategy.

What it does help with is helping you focus during your initial reading, which is good news for me because I love purple highlighters, as I wrote about here.

As you read text the first couple of times, highlight it, mark it up, and really engage with it. This is part of what is called annotating, and it part of what it means to really dig in deep to the reading, not just skim.

If you do a close reading while you are first reading, using highlighting, sticky notes, taking regular or visual notes, and really focusing on it, then highlighting during studying doesn’t help, according to the research.

To use highlighting effectively:

I love visual notetaking to help engage with text. If you are super convinced you can’t draw (a fallacy), check out this video that shows how to take visual notes without drawing.

2. Don’t read it over and over

Re-reading the entirety of the same text you read for initial learning doesn’t appear to work. And all the gifted kids said, “Amen.”

Read it well the first time (see above), and then study the notes you’ve taken on the material, rather than re-read the same thing over and over.

If you take a practice test and find that you have a big gap, you may need to re-read a section that you thought you’d studied well, but the results don’t bear that out.

Remember: this is re-reading for studying, not initial learning. During initial learning, it will likely take two (or more) readings of the material (sorry – I know you liked me for a minute there). For studying, the time when you are going back to the material in preparation for creating a demonstration of the learning, re-reading the entirety of the text is not your best bet.

Mnemonics (like “Please Excuse My Dear Aunt Sally” to remember the Order of Operations) are memory tricks, and they work for recall, but not for understanding.

I love mnemonics. In German, they are called an “Eselbruecke” which literally means “donkey bridge” – irrelevant but fascinating.

Mnemonics come in lots of flavors, like names (Pvt. Tim Hall for the names of the essential amino acids) or songs (Anyone wanna sing the preposition song to the tune of  “Jingle Bells” with me?).

Even diagrams are mnemonics, as are rhymes such as “30 days hath September…”

I still remember the cranial nerves from a mnemonic I learned in 1985.

If that’s the case, why would I say they have limited value?

Because they are shallow. They only help with the most superficial form of learning, and we’re not asked to do that as often as we are analytical learning.

If you just have to learn a list of things, they’re great.

If you have to understand the material, use a different technique.

4. Save your bed for sleeping

Lying in bed while studying in your footie pajamas sounds great, doesn’t it?

“Comfy it may be, helpful it is not,” as Yoda would say.

Your brain does a pretty good job of associating places with activities, and if you try to study while reclining on your bed, you may find yourself sleeping while you should have been studying.

Everyone has preferences for places to study. Some people like large, crowded spaces, while other like isolated silence.

Some like couches, while others think that all studying should be done at the kitchen table. These are all preferences with pros and cons, but one thing we know is that while it is important to be comfortable while studying, it’s equally important not to be too comfortable.

Look for a study place that:

5. Turn off the tunes

Listening to your favorite music while you study is standard practice for many students, but this one is a big no-no.

As a general rule, listening to music while studying has a deleterious (I love that word) effect on learning material, even if you like the music. Look, I warned you that you weren’t going to like this list.

What does help is to listen to music you like BEFORE you study, so go ahead – blast your fave tunes for a few minutes and dance around before hitting the books.

However, silence is golden during the actual study session.

You may think it’s helping you, but what it’s actually doing is giving you something to focus on other than what you’re supposed to be focused on. If you like that thing better than studying, you think you’re doing great, when what you’re really doing great at is distracting yourself.

Some of the best research has “fast and loud music disrupts reading comprehension” as part of the study title. Is that what you’re really going for in studying? I think not.

The only studies that have shown any positive correlation between music and studying have looked at low level classical background music. Be honest: is that what you’re listing to?

If you’d like to read about what happens in the brain, read this article from the Washington Post.

I love music, and it enriches life in so many ways. Studying isn’t one of them, though, so urn off your headphones and focus.

Before you write angry comment to me about this, go read the research because you know I did.

6. Multitasking is an epic fail

Multitasking is cognitively expensive. There is a huge opportunity cost when you try to study while having your phone next to you so you don’t miss your friend’s very important text, the TV on, your favorite web browser open, and your headphones blasting (see above).

A study done at the University of Connecticut showed that students who multi-task while studying take longer to study. Who needs that?

It turns out that multitasking is a terrible idea for nearly everyone in nearly every circumstance. You can read Mental Floss’s article on it, or this article from PBS that describes students’ studying while multitasking as “spotty” and “shallow.”

Somehow, I don’t think that’s what you’re going for.

Go ahead and multitask if what you want is to be poor at separating relevant from irrelevant information, higher levels of stress hormones floating through your bloodstream and if you really wish you had diminished mental organization, because that’s what you’ll get.

Put the devices down for the duration. I’ll let Qui-Gon have the last word on this one:

Someone needs to make a tshirt of that.

7. Marathons are for running and Netflix, not studying

The kind of intense focus we’re talking about is more sprint-y than cross-country-y. Studying the same thing in the same way for hours on end without breaks is counterproductive.

This happens because too often we study for lengths of time rather than for goals.

Sitting down with a Leaning Tower of Textbooks, determined to go through the whole thing without goal or break is a recipe for disaster.

Breaks should be bio, rather than tech, in nature. Eat a healthy snack, drink some water, run around the block, do a few yoga poses or stretch. Don’t get sucked into the vortex of social media – you may never get out.

Pace yourself for studying over time. It’s better to spread it out over days if you can because the brain just works better that way. You will retain more if you study two hours a day for six days than if you tried to study twelve hours in a row one day.

At the same time, it’s better not to wait too long between sessions. Don’t study something one day and then not again for three weeks. Your poor hippocampus simply won’t know what to make of that kind of craziness. The American Psychological Association agrees with me, which you should find comforting.

When it comes to studying, saying you’ve studied 30 hours in the last two days doesn’t impressive anyone (especially mathematicians). What does? Reasonable amounts of time spent focusing on goal-based studying while not allowing yourself to be distracted by the post du jour on Instagram or Facebook. 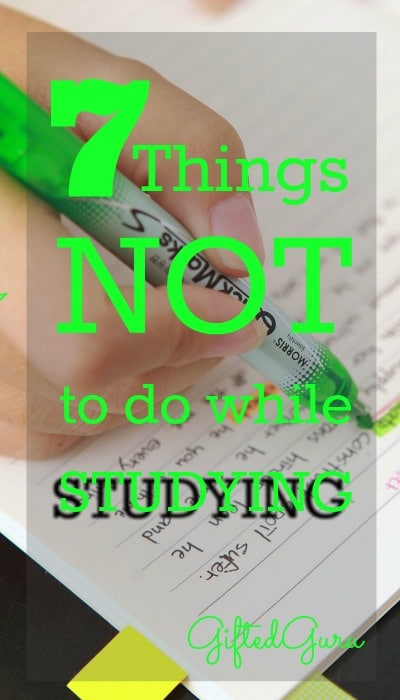