It’s an open secret that the relationship between parents and schools can be complicated, and this is especially true if parents feel the school isn’t meeting the needs of the child. It can get heated. It can get ugly. And unfortunately, it often doesn’t get solved in a way that really works for anyone.

What are some steps you can take when school isn’t meeting the needs of your child? Here are six of them. Now, I’m a gifted ed person, so that’s my paradigm, but the steps work for children anywhere on the IQ bell curve.

Step 1: Get the whole story.

Keep in mind that your child may not be a reliable reporter. I’m not saying they lie, but I’m saying that things they tell you are only half of the story. Some stories seem like they couldn’t possibly have another side, but trust me, they often do.

If your child is getting in the car upset after school, think about your own reaction to this. Sometimes we inadvertently incentivize children to “tattle” on the teacher by giving them way more attention when they tell us negative tales as opposed to positive ones.

Even if we don’t say anything in front of them, believe me, they hear us complaining to friends on the phone, and if they don’t, their friends tell them what they hear their parents say.

If something sounds off, ask. And ask politely, not accusingly. There’s a big difference between an email that says, “Could you tell me how Charlie could avoid being left outside at recess?” and one sent to the principal that says, “Ms. So-and-So left my son alone after recess. I want her fired.” Or words to that effect. You get it.

Nebulous complaints like, “The teacher hates my child” or “My child is bored” are so supremely useless that they make the situation worse not better. What is specifically going on? What does it look like?

When you feel like you have the problem clarified, turn it into a question, as opposed to an accusation.

Here are examples of clarified issues in question form:

– My child often finishes early. What can she do that will be engaging when she finishes?

– I’m noticing that my child seems to be having trouble knowing where to get the make-up work. What’s the process for that?

– I understand how frustrating it can be when Ryan doesn’t take the work from the backpack and put it in the turn-in bin. What can I do to help with that?

– The math homework I’m seeing seems pretty far below what I’ve seen Madison do just for fun. How do you usually handle it when a student is beyond the grade level work?

Personality conflicts can be harder, but here are some suggestions:

– I notice that when Sara gets tired, she can be really hard to reason with. I totally understand that. Is there a way I can help so that you can enjoy her as much as I do?

– Brant seems to be under the impression that he’s not your secret favorite! What kinds of behaviors are you seeing in class that make him hard to get along with?

– Kim’s ADD can make her really impulsive, and that’s hard at home, too. We just want you to know that we understand that and would love to help her learn to build her relationship with you. Do you have any suggestions for us?

{Note: be open to the answers. They might hurt.}

If you cannot clarify the issue and frame it as a question, you are just as much a part of the problem as any other moving part in this tale.

This step should involve just you and the teacher. Here’s how parents make it worse:

– let themselves get so worked up they can’t be rational

If you’ve had casual conversations like the ones that can lead from the questions above, and you still feel like the situation is not working (give it some time – not just one day), it’s time to ask for a more formal meeting in the form of a conference.

To request a conference, email the teacher with something like this:

I appreciate the time you’ve spent trying to help improve the situation with Ashton. I think we can agree that it’s not really resolved, so I think we could use some extra help. I’m going to request a time when we can meet in person with an administrator so we can get some extra eyes on the issues. I’m looking forward to being able to find common ground and an effective solution.

Then, request that an Assistant Principal or Principal attend the conference as well. If the child receives services through special ed or some other department, include them also.

If the conference doesn’t solve it (and let’s be honest, odds are slim that it will), then it’s time to take it up a notch. If you met with an assistant principal at the first conference, ask for a conference with the principal in attendance the second time.

Some people like to skip the AP and go to the principal, but I like to go to the AP first. It gives you more documentation of what you’ve tried, makes you look like a problem-solver, and gives you more ammunition later (just saying).

At this meeting, bring evidence of all you’ve tried. Bring work samples. Bring a bulleted list of issues and things you’ve already tried. Come with a plan of your own comprised of specific, reasonable things you would like to happen.

Really, be reasonable. Wanting the whole third grade rearranged for your child is not one of the cards in the deck. Violating state law or district policy is not at the principal’s discretion.

Have concrete, measurable goals for both teacher and child:

– The teacher will not yell at Sam.

– Jillian will not role her eyes at the teacher, nor interrupt her.

– The teacher will assign appropriate amounts of work (no more than 10 minutes per day per grade level or whatever).

– Ethan will give full effort on his work without complaint.

– The teacher will allow Evan to step outside and take ten breaths before having to read out loud.

– Julie will raise her hand before speaking and will not argue if she is not called on.

– Pearson will be moved to the classroom of another teacher.

If this still doesn’t improve the situation, then it’s time to go to central office. Most people will say to complain to the Superintendent, but to be honest, that’s not where to start in the great majority of cases. It’s more effective to go through the normal channels central office has for handling complaints.

If you try to circumvent those, you will just look like a jerk and that never helps. There’s such a thing as over-advocating. Breathe deeply and take it step-by-step.

If, after navigating through the district’s due process, you still cannot negotiate a satisfactory plan, then it’s time to look at your other options. This does not mean that there has been failure – it just means that the fit cannot be forced.

– homeschooling (this is not an option of last resort – it’s a great solution for many, many families)

– transfers to other campuses within the district

– temporary solutions, such as homeschooling for the rest of the year until the teacher or school changes

This may seem like I’m putting all of the responsibility on the parent and not enough on the school. Here’s the bottom line: do you want to be right or do you want your child to have a successful experience? You can find fault or you can find a solution. These aren’t platitudes or chichés. Well, maybe they’re clichés, but that doesn’t mean they’re not true.

School is a relationship, and like any relationship, it can have its ups and downs. With patience and planning, you can navigate the rough waters and lead by example as you show your child through your own actions how to handle it when something goes wrong with something important. 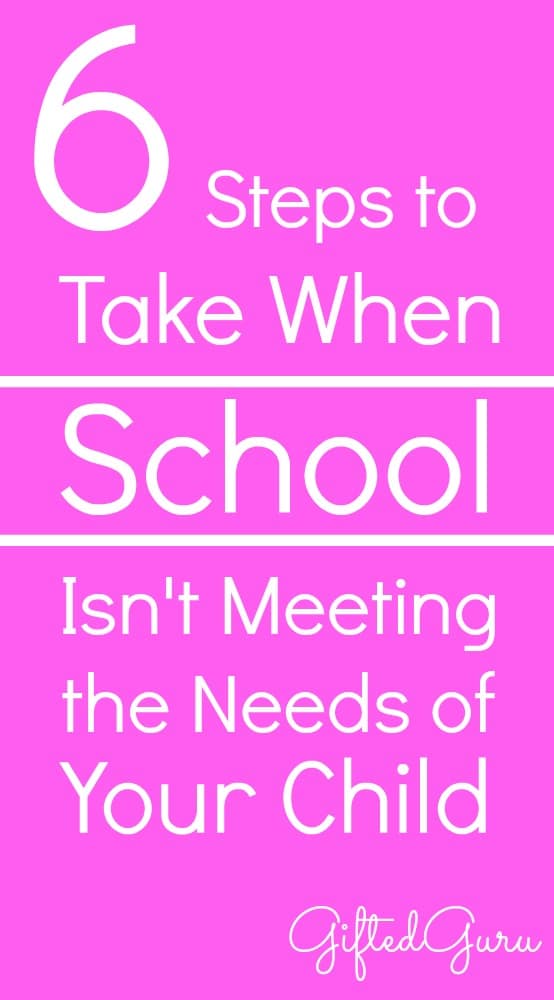