5 Things I Loved about Child Genius 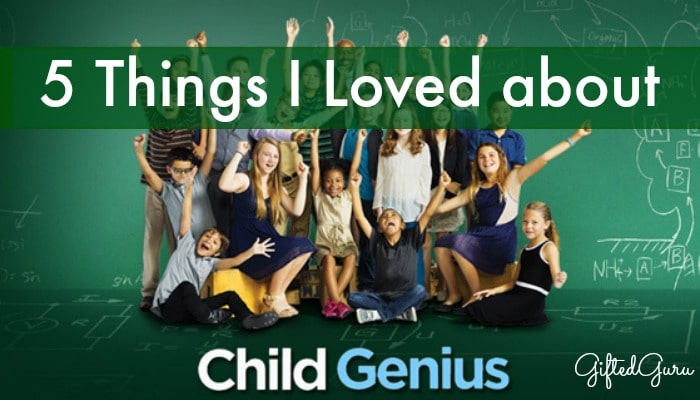 It’s true: I loved the show Child Genius. I’ve got five things I specifically loved about it. Many others did as well, apparently, because it’s currently casting a second season.

Others disagreed. This became apparent when  I got tweets like this

Some people have criticized the show, saying that memorizing doesn’t equal intelligence. Does anyone disagree with that? (crickets).

However, the show didn’t purport to do that. The kids had to be super smart to get on the show in the first place – after that it was a competition that tested the ability to:

I think those things have value and are their own form of intelligence. The show showed one side of what it means to be smart, and that’s one more side than we had before.

Some people think the show exploited kids. Eh. What’s that mean? The parents gained nothing. I don’t know anyone whose participation wasn’t driven by the child, not the parent.

Exploitation takes lots of forms. If I have a blog and say in my “About” section that I’m a mom of three kids, isn’t that its own form of exploitation? I’m using them as a way to establish credibility. Just stirrin’ the ol’ pot.

I waited until the show was over to write this defense of the show. Please don’t see this as shameless self-promotion (In full disclosure, I was on it although I earned no compensation for it.).

No one watching the show could come away from it not knowing that these kids need a different type of school experience from that of typical learners. This isn’t elitism – it’s equity. There is no ribbon for gifted kids.

There are very few states that even recognize the need to train teachers and counselors in the needs of gifted children. Child Genius allowed everyone who happened to stay through Dance Moms to see that there is a group of kids who cannot and should not be expected to find challenge and opportunity in a typical school environment.

People watching it could understand easily how a parent would decide to homeschool a child with these needs, which was  huge advantage by itself.

Gifted kids. Geniuses. Smart kids. Use whatever term you like, it got people talking about them, and it raised awareness that they exist and that when you have high ability, you have a need to use it. When Graham was talking about hurricanes with the television meteorologist, the meteorologist was blown away (no pun intended), but every single parent of a gifted kid just nodded. Intense passion for a subject is as common as a cowlick in gifted kids. Who outside of the gifted community really knew that before?

We learned that just because one kid in a family has high cognitive skills, that doesn’t mean everyone does.

We learned that parenting these kids is no walk in the park (unless it’s a super complex park).

We learned that gifted kids develop at different rates – what we call asynchronous development – and may have a disconnect between how well they do in one subject over another or their social development versus their cognitive development.

The show opened up conversations among families. In the BrightKids Facebook Group, comments like this were shared:

My kids and I watched the first and second episode this past week. We were on the fence, but decided we like it. It’s useful for conversations with my kids…how not to deal with ourselves and each other…ways to interact…even smart kids (people) have weaknesses/holes.

We watch it as a family now. Son was rocking the math from the first episode but, daughter got her chance to rule the zoology portion. Still providing many conversation starters – had an interesting one regarding Graham’s creationism views. Also, seeing all the different family dynamics was very interesting for family discussion.

The show has prompted deep discussions for us as well. [My daughter] loves it and watches each show multiple times.

When my son gets in “trouble” we say, “NO ONE remembers 2nd. Go get the deck of cards now!” And laugh. And the show has given my son a different appreciation for the parents he has. My opinion is that God gives us the children we are meant to parent. We LOVE the show!

Anything that gives parents an opportunity to create new inside jokes, family traditions, possibilities for deep discussion and bonding is worthwhile (in my opinion). I actually learned this lesson after the Bill Clinton escapades – I had to explain things to my children that I was not interested in explaining, yet it ended up being positive. I mean, if you can explain that, you can explain anything.

My daughter loves this show, as she sees kids that she can relate to, and she enjoys watching the contests.

It’s hard to overestimate the isolation of being a highly gifted child. If you’re in the top one or two percent on the cognitive ability bell curve, you may never encounter another child in your school experience who thinks the way you think. Watching Child Genius allowed gifted children around the world to see other kids who not only thought like they did, but actually enjoyed being smart. They saw other kids who actually liked learning – even if was simply to give back facts and even if it was only the subjects they liked.

The kids on the show got to hang out with other kids like themselves. That alone has tremendous value. Other kids watching were envious of that. I know because they tell me.

One mom described that seeing some of the topics raised interest in her own child, saying

[My child] has been especially interested in the dynamics between the parents and children, and she also really, really wants to try to memorize all 52 cards!

It’s not only parents who feel alone in Giftedland. In fact, the isolation of being a parent of gifted children has led to an amazing growth in the Mensa-sponsored Facebook group for parents and educators interested in the needs of gifted children. It’s a safe place to share that child did well at something – a common occurrence for other parents that is often denied parents of the cognitively gifted. You don’t know what it’s like not to be able to celebrate your child until you’re shut down with insensitive comments and disapproval, often by family members, when you do so.

People often think that school comes easily to the gifted, failing to understand that cognitive ability is only one part of the school success formula, and that gifted children often struggle with the other parts.

Usually, I like hearing opinions that are the opposite of mine. How else would I grow?

There are a couple of positions that I find untenable, however, and one of these is the chorus of voices of people who think that memorization is useless and low-level. Please.

It was hard to watch Child Genius without rummaging through your own brain to see if you knew the information. Why do you think people like to watch Jeopardy!? It’s actually fun.

I wrote an article on why you should memorize poetry, and many of those reasons apply to the memorization of other things as well. The brain likes things with which it is familiar. If I know a lot about geographical facts, I have a framework with which to care about the world. I care more about an earthquake in Nepal if I know where it is. I care more about high level math when its basic facts are old friends of mine.

You can talk about high-level thinking all day long, but there is nothing more annoying than listening to someone “high-level think” about something about which they are ignorant. I enter into evidence politicians. No matter how awesome your mixer is, you can’t bake a cake without ingredients.

One man’s trivia is another man’s trump card. I have been in so many situations in which seemingly random facts that I had at my disposal in my crowded gray matter benefited me or others. If you’re not convinced, peruse In Praise of Memorization: 10 Proven Brain Benefits or The New Yorker article Why We Should Memorize.

As an aside, if you like memorizing and want to learn more about it, I highly recommend Josh Foer’s Moonwalking with Einstein.

Objecting to memorizing is an almost inexcusable form of ignorance in people (like educators) who should know better. There. That should get me some more hate Tweets.

Child Genius was a reminder to us that not all stress is bad stress. At the end of the show, one little boy talked about how much closer he and his father had grown during the competition, and I think one thing the show did was send a powerful reminder and wake-up call to parents everywhere that kids want more time with us.

Look, no one’s going to argue that we saw nothing but healthy relationships. Of course, if you followed me around with a camera for an extended period of time, who knows what you’d find, and we need to keep in mind that editing for television is a powerful thing. Do you see nothing but healthy relationships everywhere you go? If so, can you please tell me where you live so I can move there?

No one likes to see kids cry. Well, very few normal people like to see kids cry. What I think is dangerous, however, is the idea that an upset kid is the worst thing possible. We’ve become a society that will do anything to keep kids from crying. That’s not healthy. Learning to deal with disappointment is a key developmental stage that some people never learn. Protecting kids from disappointment does them (and the people who must work or live with them) a tremendous disservice. Tantruming is not a skill.

I would bet that most of the participants would do it again. I absolutely think they would.

When people recognize me in the grocery store, they often say something like, “You were the lady on Child Genius who translated everything!”

Do I wish we could have a show that just focused on the needs of gifted kids without sensationalism or competition? Yes. Is that reasonable? Not in our society (unfortunately).

So watch or don’t watch. Agree or don’t agree. I think Child Genius had value, and I learned from it. Now I’m going to go drink more water.